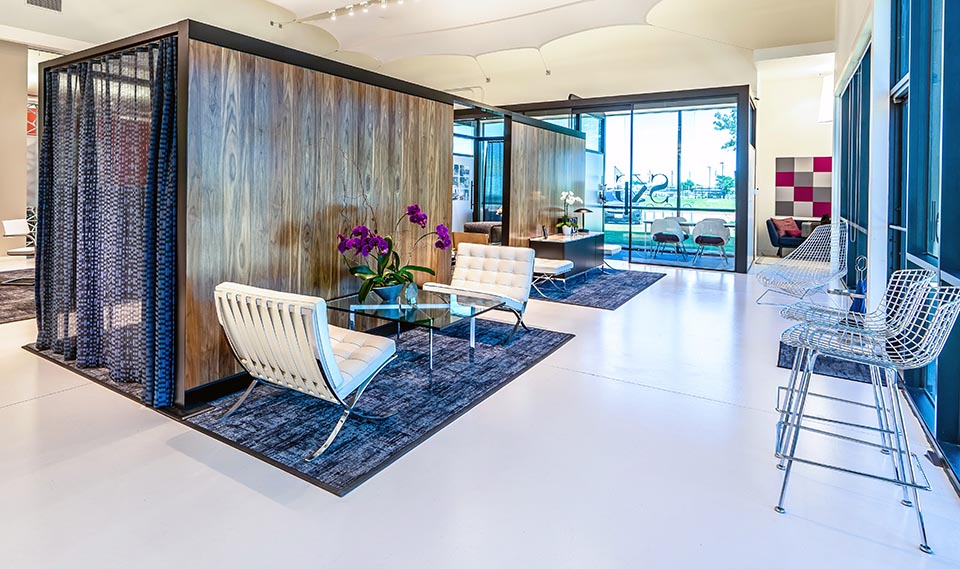 At the SKG showroom the latest styles are shown along with the timeless designs of their flagship brand, Knoll.

Since 1996, SKG has been successfully transforming traditional workspace systems into environments connecting people to productivity, talent to brand and vision, and individual lives to commitment. During that time, SKG has become the exclusive distributor of Knoll products for Austin, San Antonio, and Central and South Texas. The company today is one of the largest Knoll dealerships in the country and the second largest woman-owned business in Central Texas. Its impressive portfolio of projects spans the country and includes corporate, government, education, and healthcare environments. 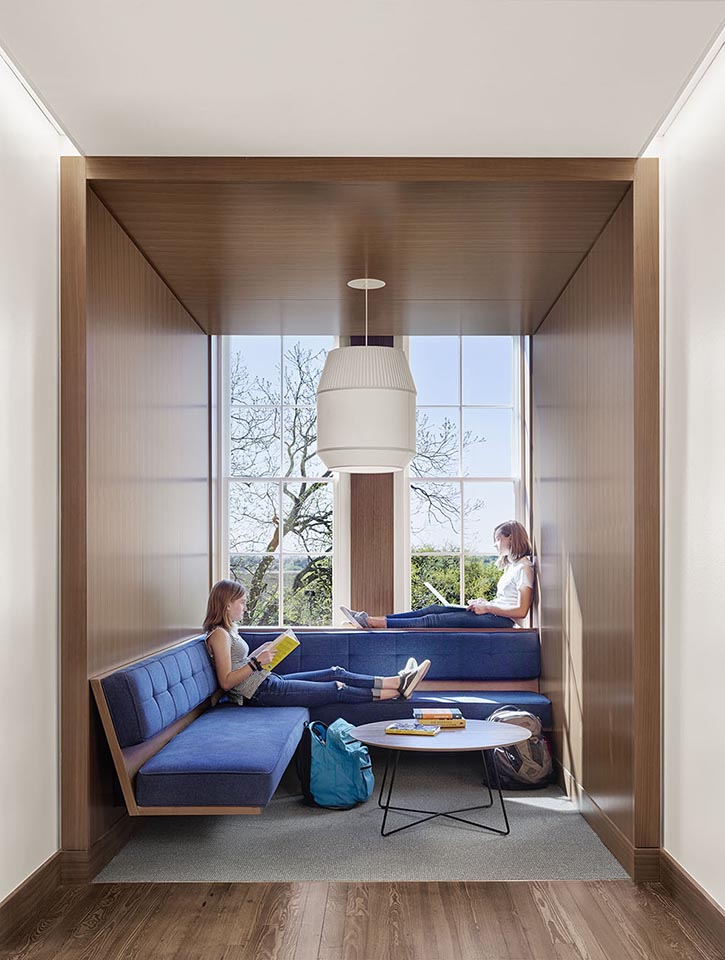 SKG was instrumental in the repurposing of the Holy Cross building on the campus of St. Edward’s University.

In addition to being the authorized Knoll dealership in Central and South Texas, SKG is currently working on projects nationally. The company has successfully completed projects on the East and West Coasts of the U.S. as well as in Barbados and Canada. 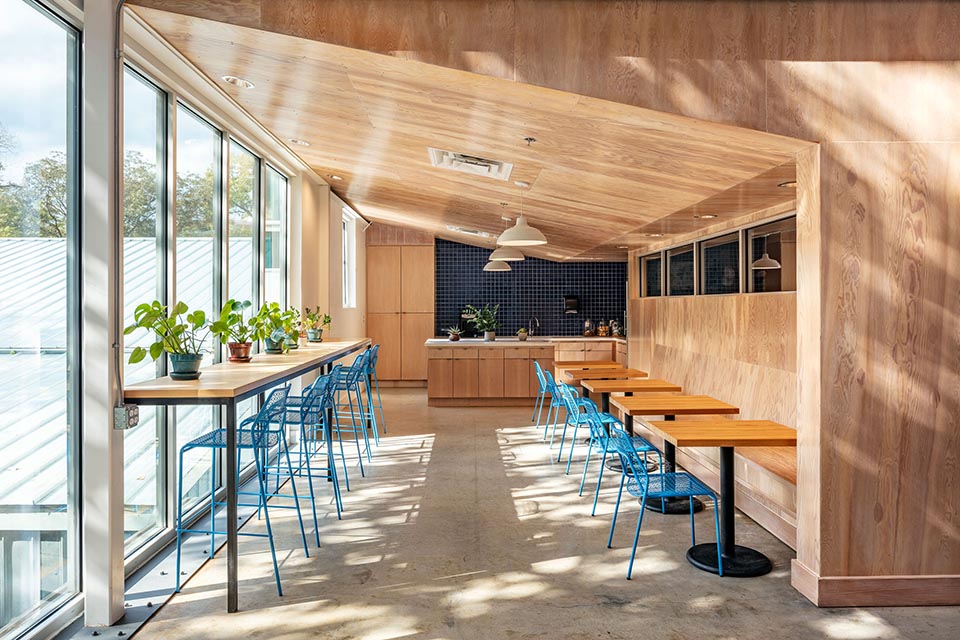 SKG provides furniture solutions from the boardroom to the breakroom, like here at the headquarters of uShip.

Roots in the Lone Star State

Ron Shelton was working for a Knoll dealership in Dallas in the mid-1990s when Knoll approached him on the company’s idea of expanding its distribution network in Austin. Ron asked Diana Keller if she would be interested in joining him in a business partnership that would do just that. She gave an enthusiastic thumbs-up on the idea.

“We were excited about the possibility of exploiting an underserved market,” Diana recalls. “I loved the idea of a start-up,” she adds, “of getting things started from nothing.”

After spending a year formulating their business plan and being turned down by five banks on financing, the sixth bank they approached said “yes.” SKG was incorporated as the Shelton-Keller Group in October 1995 and opened its doors in downtown Austin in January of the following year.

The bank that took a chance on them remains their business partner a quarter century later. 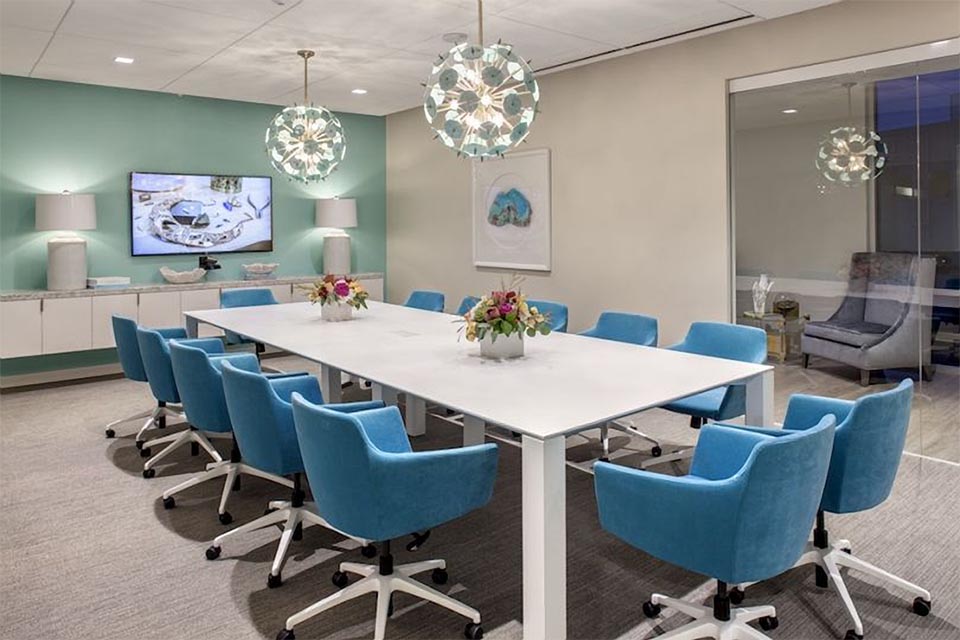 A Record of Success

While Shelton retired from the business in 2015, Diana continues to serve as SKG’s President. She also forged a new partnership with Beth Goff-McMillan. Under their watch, the company has expanded dramatically. More than 80 design, support, and strategic workplace SKG professionals serve clients across the country.

In addition to its Austin headquarters, with its 10,000 square feet of office space, 25,000-square-foot showroom, and an auxiliary warehouse for showroom management, SKG now includes a second location in San Antonio. A third location is planned for College Station along with an e-commerce site.

“Diana has fostered the company’s growth with an impeccable record of customer service,” notes McMillan, the company’s CEO. “As a devotee of design with an ability to understand the subtle functional elements most people take for granted in their daily lives, she has instilled in the organization a focus on achieving a successful outcome for every client.”

McMillan’s new vision for the company, which focuses on strategic space planning, is a disruptive concept at home in a market full of entrepreneurs disrupting their industries on a daily basis. To change the experience, SKG has had to change its approach, its staff, its technology, products, and services.

“SKG’s mission is to provide the ‘Spaces to Live the Life of Your Business’,” McMillan adds. “Most businesses in our industry are focused solely on selling furniture. We learn how each of our customers will use the space they plan to occupy so we can offer the right combination of furniture, architectural and technology solutions to create the ideal working, learning, healing or hospitality environment.” 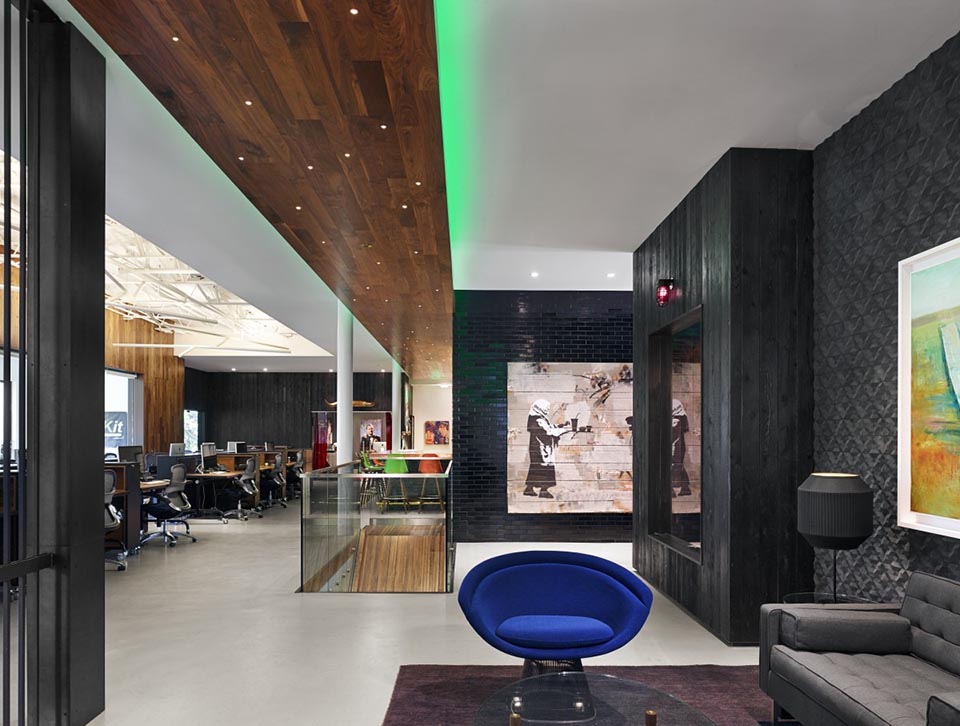 SKG furnished the headquarters of The Chive, called the “coolest office” in Austin by a local business publication.

SKG has been the company that some of the most recognized names in the region and across the country have turned to with confidence. The company’s professionals furnished the local headquarters of the world’s largest Internet services company; Texas A&M University (1.8 million square feet); the City of Austin; Bergstrom International Airport; Kendra Scott; and E-Trade, among others.

SKG’s phenomenal success story across many fronts has not gone unnoticed, both in the Austin area and around the country. The company is ranked Number One on the Austin Business Journal’s most recent list of largest commercial furniture dealers. In 2019, SKG jumped 1,700 spots on the Inc. 5000 list of largest private companies and made its second appearance on the ABJ’s Fast 50 list of fastest growing companies. Other awards include Austin American-Statesman Top Workplace in 2018; ABJ’s Top Private Company in 2017; and the ABJ’s Top Women-Owned Business for three consecutive years beginning in 2015.

With women in the top management positions at SKG, the company has maintained an unwavering focus on women’s issues. SKG actively supports the Austin Community Foundation, the Austin Women’s Fund, Salvation Army, the Refuge, and Austin Diaper Bank.

“What began as a furniture dealer has evolved today into a business focused on helping organizations think strategically,” McMillan points out. “Our industry – commercial furniture manufacturing – has traditionally been a male-dominated space. We have hired a lot of women, not all of them with design and furniture backgrounds, and created a diverse and empowered workforce. We have created an environment that offers the support and flexibility for people with families that we never had when we were working for other people all while disrupting our market and changing our industry.”