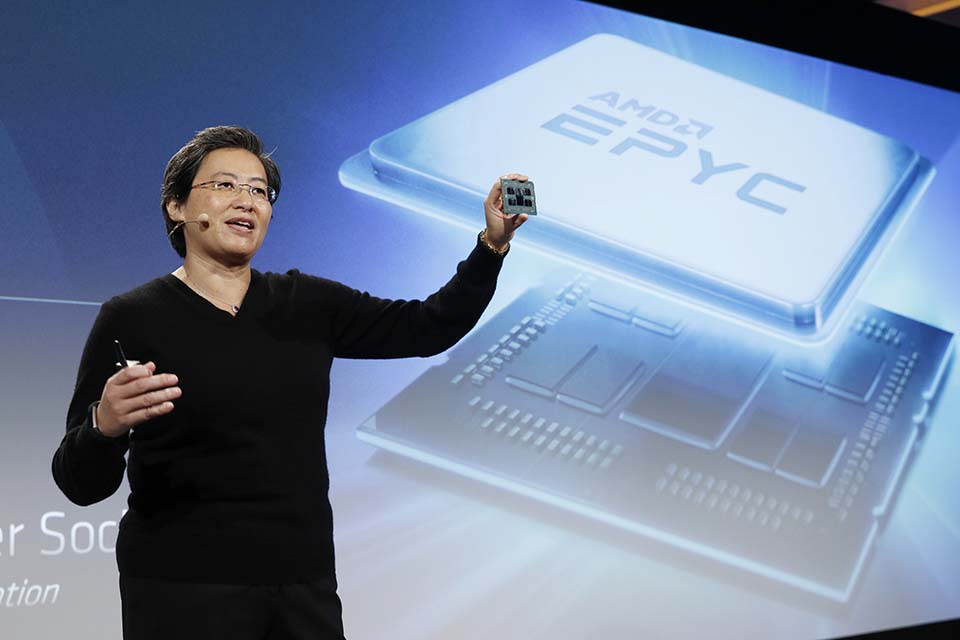 Advanced Micro Devices (AMD) traces its history in Austin to 1979, but the company’s roots go back a decade earlier to Silicon Valley. It was there in 1969 when AMD was founded by eight individuals as a Silicon Valley start-up with employees focusing on a single mission — developing leading edge semiconductor solutions. Those days were the cusp of the semiconductor industry, and AMD would lead the way in high-performance computing and graphics solutions that continue to transform our lives today.

Whether in the realm of gaming, VR, AR, artificial intelligence, or the new cloud workloads, these applications require high performance. AMD is proud to have the unique capability to put these together into solutions. 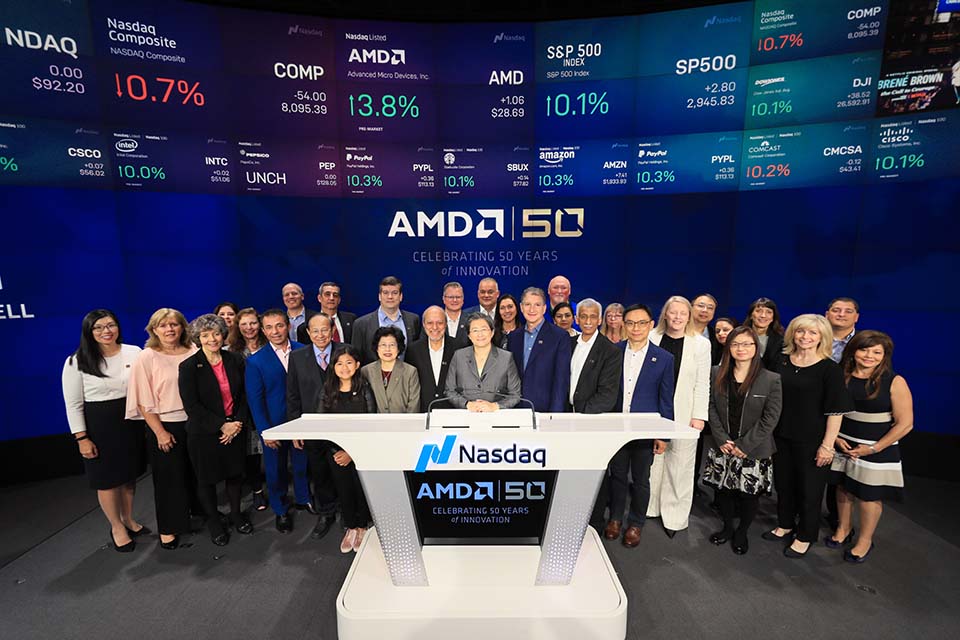 AMD leaders ring the NASDAQ bell on the company’s 50th anniversary, May 1, 2019

A Company on the Cutting Edge

AMD takes great pride in creating high-performance computing and graphics technologies – the foundational building blocks for PCs, gaming, and the datacenter. The semiconductor solutions that AMD create are designed to help solve some of the world’s toughest problems by enabling its creators, researchers, inventors, and explorers.

AMD professionals perform leading-edge research and provide technology direction critical to the company’s future. The diverse research areas of those professionals range from circuit design and computer architecture to system software and application engineering. The overall goal is to influence both industry and academia through exploration of important research directions and future technologies in an environment conducive to collaborations with groups within and outside AMD and through publication of the company’s findings.

AMD research teams are made up of a strong group of thought leaders from academia and industry, as well as recent graduates from leading research universities. Those teams pride themselves on fostering a culture of innovative research that supports and encourages research in the academic community. They also maintain alignment with AMD strategic objectives and close ties to the company’s product development teams.

Much of the company’s focus falls into the following broad areas:

The AMD teams understand that art is inspired by life. In much the same way, AMD innovations are inspired by life – by people and what they can accomplish with the right technology. The company today remains focused on the vision of its founders – imagining a better world and taking inspiration from its customers to deliver innovative solutions to the challenges and possibilities of the digital age. AMD doesn’t create technology for technology’s sake. The company innovates for its customers and what they can achieve. 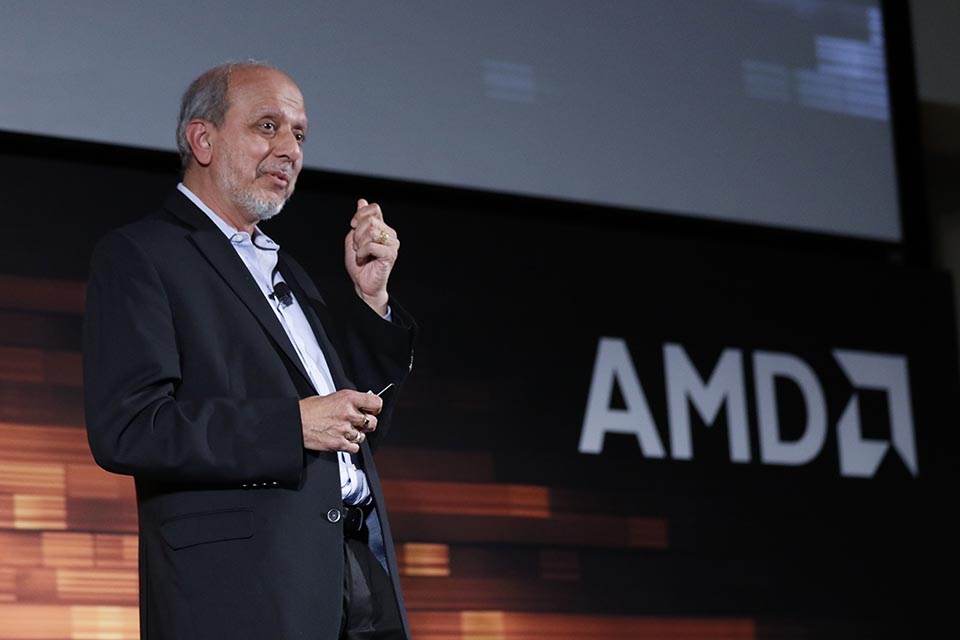 A Success Story in Austin

The Austin area is often nicknamed “Silicon Hills” because of the concentration of semiconductor design companies, including AMD, in the area. When AMD chose Austin as the location for its manufacturing plant in 1979, the company embraced the opportunities and responsibilities that come with this recognition. In 2008, AMD opened the multi-building “Lone Star” campus, expanding its Austin operations to a large corporate presence. That same year, the company announced plans to spin off fab manufacturing capabilities to become a design-only firm and no longer operates manufacturing plants.

Today, AMD’s Austin site is the company’s largest operations and R&D site in the U.S. The laser focus of the approximately 2,100 employees at the site is on innovation and solid execution. They deliver on their commitment to their customers. 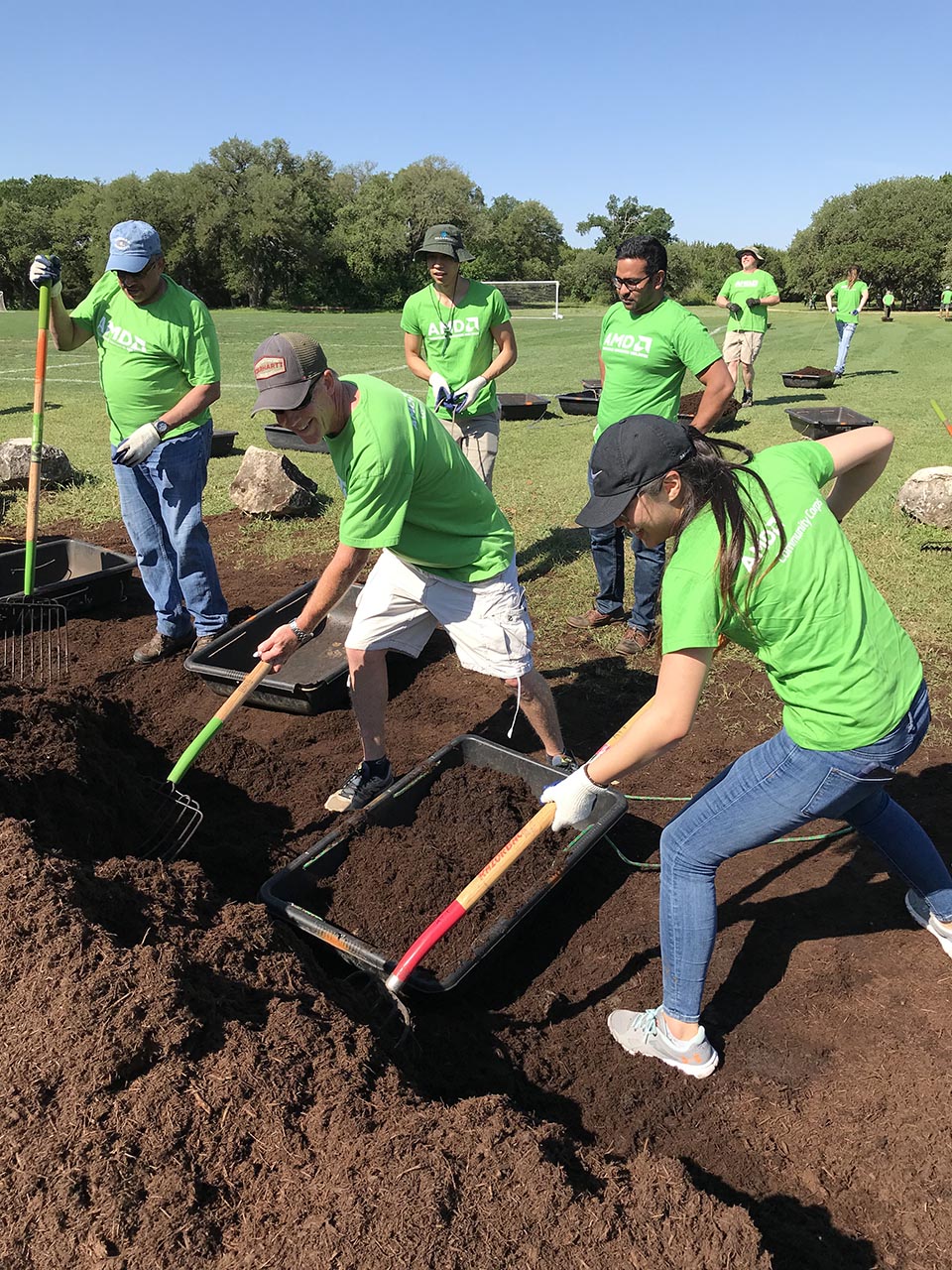 Hundreds of millions of consumers, leading Fortune 500 businesses, and cutting-edge scientific research facilities around the world rely on AMD technology daily to improve how they live, work, and play. AMD employees in Austin and around the world are focused on building great products that push the boundaries of what is possible.

They have succeeded on numerous fronts. Finding cures for the most common and life-threatening diseases, for example, takes a huge amount of time and effort. Theories need to be devised, potential drug regimens designed, and then there will be years of testing before a new drug can be proven to be effective, safe, and ready to be delivered to patients. It’s a complex, time-consuming process of trial and error that would take years if performed using laboratory-based tests alone. But what if that process could be accelerated using simulations on supercomputers to find the drug formulations with the best potential for success before time-consuming clinical trials begin?

Employing AMD EPYC processors and Radeon Instinct accelerators, Symmetric Computing adapted this approach in its work with medical researchers. That approach resulted in a much faster process of finding potential drugs for the treatment of Alzheimer’s, Parkinson’s, diabetes, and other diseases.

“You’re not going to physically test 100 million chemicals,” stated Richard Anderson, President and CTO of Symmetric Computing, Inc. “It’s not going to happen. Thanks to AMD’s technology, we can get the same or better performance than Intel-based servers for a quarter the price. With our platform, we can do the main work via the simulation.”

A major beneficiary has been the Venture Development Center at the University of Massachusetts in Boston where one of the company’s biggest focuses has been Alzheimer’s disease.
This, along with numerous “firsts” and other ground-breaking innovations, has led to peer recognition and awards for AMD, including being named to Thomson Reuters list of “100 Global Tech Leaders” in 2018. The company’s track record for workplace performance has also been impressive. AMD was named to Fast Company’s “Best Places to Work For Innovators” and the Bloomberg “Gender Equality Index” in 2019. AMD also made the Human Rights Campaign Corporate Equality Index for three consecutive years beginning in 2017 and Forbes’ list of “America’s Most Just Companies” in 2017 and 2018. 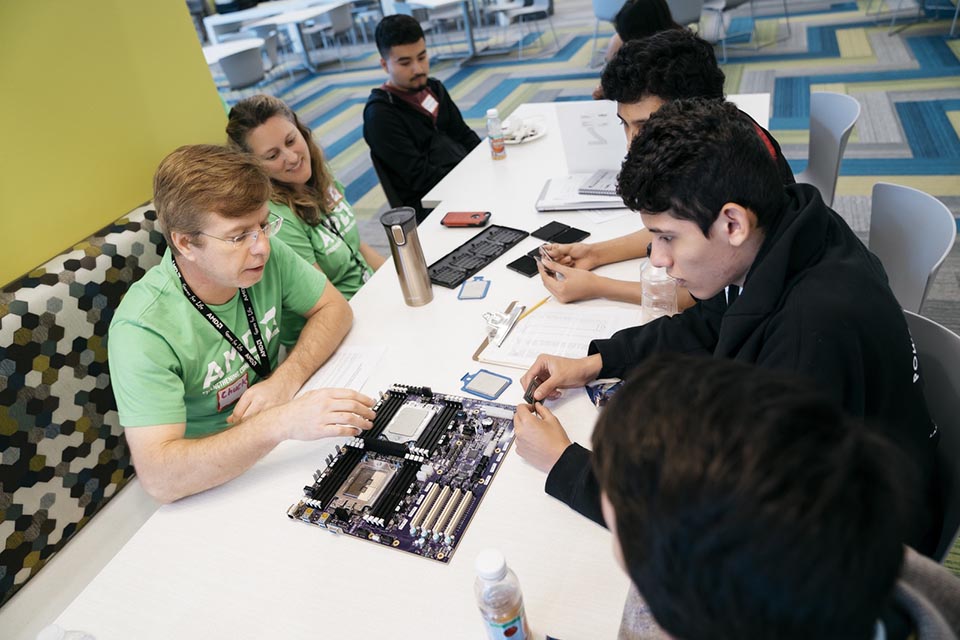 On the Home Front

AMD has a deep commitment to the communities in which its employees live and work. The company’s employees – from interns to the C-suite – participate in volunteer activities throughout the year. Since 1995, AMD’s workforce worldwide has performed more than 210,000 hours of volunteer service. And, each year, AMD awards charitable grants to local organizations.